A couple weeks ago, I traveled to Munich’s Confucius Institute to take the the most advanced test of Chinese proficiency for non-native speakers, the HSK 6 — and after only very little test-specific preparation and just a tad over two years of learning Mandarin. Today, I found out that I passed with about forty points to spare — so I’m sharing my experience, tips, and rather unorthodox approach here.

First off, what’s this unorthodoxy I’m talking about? Simple: forget any proficiency tests or vocabulary lists, and forge your own learning path. I’ll openly confess that I’m not a believer in the HSK, insofar as one even can be. If you’ve been learning Chinese for any reasonable amount of time, you’ve hopefully figured out what your motivation is, and that, not any external assessment, should be the driving force behind any Chinese-learning you do. 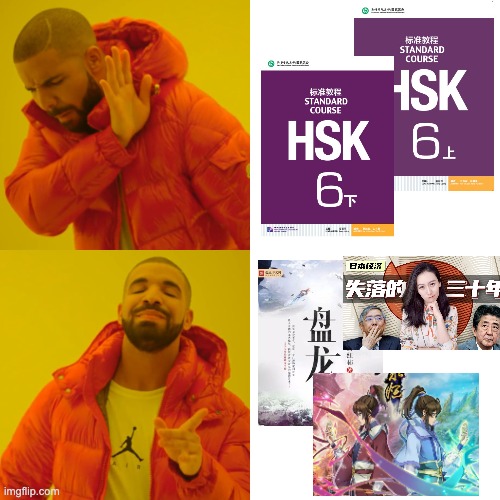 In my case, I’m most drawn to Chinese for its fantasy literature. As such, the past year or so has been spent almost single-mindedly consuming media from the xianxia/xuanhuan/qihuan genres — those interested can find my log here. This has meant a consistent about three hours a day of Chinese, mostly reading webnovels, listening to audiobooks, and/or watching a bit of non-English-subtitled donghua here and there. At my current level, I can easily read and listen to the vast majority of content in the genres, be it in movie-, TV-, or novel-form. When delving outside them to e.g. economics, science fiction, and assorted Zhihu posts, comprehension is generally not a problem.

I’ve only used the HSK textbooks up to HSK 5 (and even then just due to my former tutor’s insistence). And while I have shoved the HSK 6 vocabulary into my SRS deck to prepare for the exam, it still constitutes the significant minority of cards. Due to a combination of self-confidence and lack of time, the only other test-specific preparation I did was writing two mock exams. I stayed within the time limit when doing these, and achieved 84/86/? and 86/84/? for the Listening, Reading, and Writing sections respectively. However, it’s worth noting that these scores were for paper-based exams — more on that later.

Finally, I thought I’d share some of my learning statistics to provide a bit of numerical insight:

Again, I see the HSK exams as having no real value unless you require them as some sort of evidence. Words on the list (at least v2.0) are often quite outdated or academic, and the exam question’s ‘high-brow’ nature is not applicable to many learners whose interests lay elsewhere. To round this off, the test-taking fee is pretty steep. I won’t harp on about this; you can find a more detailed criticism of mine here.

Suffice to say, the sole reason I took the test is because I need a pass (180 or more / 300 points) in it to prove my Chinese competency for something.

I’m only drawing from the experience of two practice exams (and there were no fellow HSK 6 test-takers that day to talk to!), so take the following with a grain of salt.

Overall it felt like the real test was a lot more difficult than mock ones I took. Dialogues touched upon more complex topics, and the short passage I was supposed to summarize for the writing section had a lot more concrete nouns than practice ones provided.

Also, you’ll notice that my 听力 score is a good 20 points below the practice ones I took. While some of that can be attested to the test’s increased difficulty, there’s another major reason — I took the computer-based test. This is something I’d recommend everyone taking the HSK 6 to do, as unless you’re a masochist, memorizing how to handwrite 5000+ words should scare the living daylights out of you. However, it comes with one major drawback: listening questions are more unarguably harder.

With the paper-based practice tests I took, all the answer options for each numbered (though not explicitly written-out question) are given together on a sheet of paper. Hence, you can selectively listen to passages since you know what, in general, will be asked about and choose from the given options accordingly. Likewise, reading a bit ahead or making corrections if you’ve quickly made your answer is possible. On the other hand, the computer-based exam has a timer for each question, after which you automatically get redirected to a new page with another question. When combined with the slight delay clicking between questions, not to mention stress and my unfamiliarity with the number of questions per audio track, things were significantly complicated.

What’s more, computer-based test centers ban any note-taking, so it’s really hard to circle sections to come back to. I’m pretty sure you also can’t take notes of the audio for the handwritten test, but at least you can mark questions and easily come back to them rather than clicking through a ton of pages. This just emphasizes how strange the exam is — for two of the sections, Listening and Writing, your ability to memorize, not mastery of Chinese, play critical roles to overall success.

About a year ago, I spent a couple hundred days writing approx. one-paragraph-long texts on various foreign-language-learning sites like LangCorrect and Journaly. But since then, the only practice I’ve had is writing a few short stories on my website and summarizing the two previously-mentioned mock exam passages. Nonetheless, I still scored quite highly here, which only reinforces the fact that comprehensible input is a great learning method, even for those facing standardized tests — despite virtually no prior writing experience, the 10m+ characters read seemed to have brushed off well on me.

In the way of tips, I’d only suggest you try to include as many details from the main story as possible, and don’t feel strictly constrained by the 400-character limit. By rereading the passage a few times, I managed to nail down pretty much all of the information mentioned in the passage, and did my best to do so specifically (by writing out the main character’s name, year of graduation, number of statues photographed, etc. — it was about a Terracotta Warrior museum worker). Though yet again, I struggle to see why memorization skills should even marginally influence writing marks as shown in the markscheme.

I talked about this already in the General subsection of this article. The computer-based format was a bit of a nasty surprise, so I’d recommend those planning on taking the digital HSK 6 to practice with one of the official online mock exams (though do note that your Writing score will be inaccurate). There’s a disturbing lack of easily-accessible, unique practice papers, so I emphasize this especially strongly.

Otherwise… try to read widely? The 5000 words said to be needed to pass the HSK 6 are the tip of the iceberg — I saw words I knew to be outside of this set quite often.

Additionally, I really would have fared better here had I had an inkling of what would be asked about in advance (as I did with the paper-based tests). The 1–3 minute audio clips talked about everything from Tibetan butterflies to man-made oases, and then seemed to deliberately ask questions about as-trivial-as-possible details. So, even though I understood the passages as a whole, I often had trouble remembering which businessman was called 沙漠大叔, which subject exactly one of the speakers had as their original major, etc.

I’m honestly quite surprised by my score here, what with all my reading I thought it’d be a bit higher. Again, topics touched upon were sometimes pretty far from what I usually read about (I never knew the history of dumplings was this complex, thank you Hanban). However, I had a pretty good understanding of the passages. As such, I think this score might largely be due to the first set of reading questions — identifying grammatically incorrect sentences took a disproportionality long amount of time, and these questions were definitely harder than those I saw before.

And in terms of advice, I’d suggest leaving the more difficult/disproportionately time-consuming questions for last, and prioritizing checking your work over puzzling over them. While I finished the Reading section with time to spare, it was only five or so minutes — ones I promptly wasted on the first section instead of checking my answers.

I feel that the general impression of what needs to be done to pass the HSK 6 needs some rectification, which hopefully this post helps provide. Although there are plenty of apps, books, sites, etc. dedicated to getting you to successfully write the HSK 6 exam, it’s important to realize that:

All in all, while I’m not particularly proud of my HSK 6 score, my approach got the job done, and a lot less painfully than traditional methods would. And no matter what my score is or may have been, I don’t need some scale to tell me how ‘good’ I am at Chinese — my conversations in Mandarin and 微信读书 library do that just fine! Plus, even should I want to get a higher score for some reason, a bit more familiarity with the exam format and test-specific practice would render any worries moot.

As such, I encourage ellow learners to keep in mind what they rather than some Beijing-based examiner feel to be the aspects of Chinese most worth learning — and rest easy in the knowledge that by doing so, even external assessments will not come too hard.

I Tracked my Chinese Learning for Three Months — Takeaways

Three months of tracking every single minute spent learning Chinese. Here are the activities I did and what I learnt.

How I reached a native-level Chinese reading speed and you can too.