As part of my New Year’s Resolution for 2022, I decided to log my time learning Mandarin Chinese. A quarter of the way through (near the end of this month), I had to stop as I bought an e-reader on which it is difficult to track time spent consuming content — but have logged over 500 hours of Chinese and learned lots, some of which I’d like to share here today.

I’ve seen significant strides in my Mandarin, such as going from straightforward podcasts to fantasy audiobooks or switching to reading with native apps offering only CN-CN dictionaries. Detailed statistics following in the next section!

The dashboard that I used for tracking was one I programmed myself last year, and requires about 10 mins of entry per week to maintain. The code and instructions are available on the open-source GitHub repository here, so you can easily get it up and running for yourself if interested! 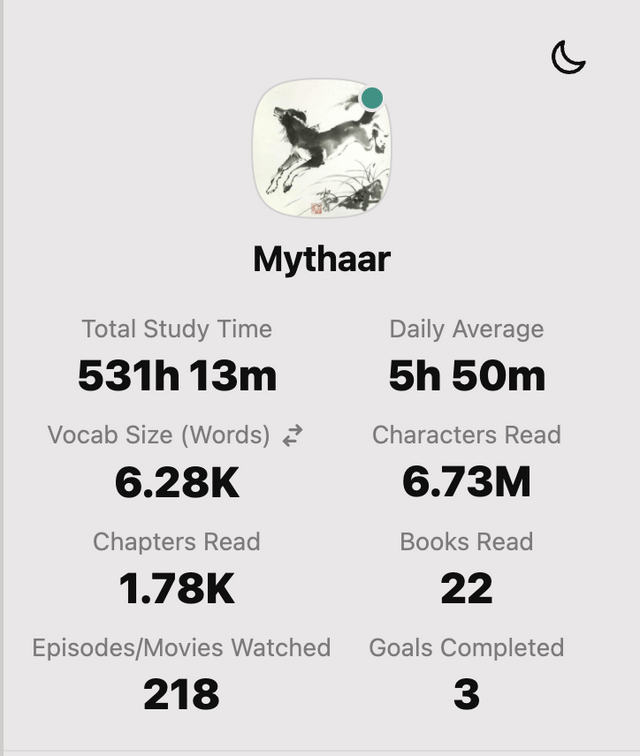 The Characters Read, Chapters Read, Books Read and Episodes/Movies Watched all include data from before the beginning of 2022, but had large jumps even so (shown in charts below).

A bigger zoom-in on the hours spent each day — indeed averaging out to about 6, but there were pretty big leaps from between 3 and 9 as a result of school holidays, exams, etc.

The four main components of language learning were rated on a 0-6 scale, based on the CEFR scale — 6 being pretty much native (C2) and 1 being a beginner (A1).

Thanks to lots of reading (over 160 hours), my reading saw quite a bit of a jump, up to closer to C1 than B2. Currently, I only read in Chinese, and have also seen quicker reading speeds up to near-native levels — my experience is detailed here.

Regular VRChat practice also pushed up speaking to a ~B2 level, but its still the second-weakest given my location in a non-Chinese speaking country. Listening, however, went a bit up as well as I began listening to audiobooks (much more attractive than podcasts).

Finally, writing saw a big boost as well, as I started seriously preparing for the end-of-year Mandarin exams I’ll be taking (handwritten, unfortunately). I had lots of writing assignments and even practiced writing some Chinese fiction content of my own — find it under a secret link on my website here (note everything is in Chinese).

I learned a lot during this process, and saw a significant shift in some of the methodologies I use to learn Chinese. I’m now more confident in my Mandarin, and I’m more comfortable with the Chinese language than I’ve ever been before.

Before getting started on resources that I used, I’d just like to share a link to another project than I’ve been working on a lot recently — Heavenly Path. I’m on of its 5 editors, and we’ve been working on this as a massive repository of human-curated Chinese learning content for those at the intermediate and above stages. And I’m not just 吹牛ing (bragging) here — we managed to get it pinned to the r/ChineseLanguage sidebar — so do check it out if you’re a Chinese learner!

But without further ado, here are the main resources I used these three months.

Barely did any writing outside of the requirements I have for school. But a few tools I can recommend are r/WriteStreakCN (used for my fiction writing project) and LangCorrect.

Logging your learning progress is extremely rewarding, especially when you can do it with something as aesthetically pleasing as an app you purpose-built for that. The code for this web app is on GitHub here, as with instructions. But there are a couple things to watch out for.

Best of luck on your own language-learning journey! Do check out this tool if you are on it, as it can be adapted for many other langauges as well with little hassle.